It was an eventful week, starting with a successful clean-up campaign. I have been needing to clean up the drawers in and the space under the vanity of the sinks. I tossed out 10-year-old peroxide, old everything else, concatenated other things, and made lots more room down there. I also cleaned off James' dresser, which was, frankly, looking like a bomb went off on it. There were old grocery receipts, pens, bits of models, pocketknives, loose coins, a remote control helicopter, a bottle of paint, and other things that didn't belong. It's now all clean and pretty, and I washed all three bureau scarves to boot. As an encore, I cleaned out all the appliance/electronic manuals and threw a bunch away (like the one for the stove we no longer have), and followed it up by rearranging the books in the spare room. "Viola" and all that.

We had another doctory weekend. Thursday we were up at six so James could be at the dentist at eight. (I drove him because it was raining and he couldn't take the power chair.) I finally bought some dental insurance (his work canceled the one we had when they reorganized), so he went to have his teeth checked. He needs several fillings and other work, and the dental insurance will not cover it for six months. At least we know how much it will cost. Eeek! Since the dentist is next to Kroger, we went there next, and then to Publix, and got the shopping done, and were home in time for me to take a nap. I am not a morning person.

And then...ta-da!...we went back to the infusion clinic and they removed the PICC line! His last intravenous treatment was yesterday. We are crossing fingers that everything is well internally. When I got home I got all the infusion stuff out of the way: the tray I did the prep on, the infusion pole, and all the supplies. Tossed out some, kept some useful stuff like the plastic gloves and saline, and recycled the heparin at Kaiser on Friday.

Friday we were up at seven for James' dermatologist appointment. He has them regularly to examine for skin cancer. She froze a troublesome wart on his right forefinger and also looked at his leg. She said the skin looked well and he could go back to wearing the compression socks!

You guessed it: we got home and I had another nap, at least until it was time to join Alice and Ken at The BBQ Place for lunch. We followed that up with a trip to Lidl.

We sorta got a chance to sleep later on Saturday, but had to get up at nine for Hair Day. This was fun. This month I remembered the Christmas gifts I forgot on the January Hair Day, and I gave out Valentine cards. It was so nice to see everyone. I don't miss going to a lot of stores, but I sure miss bigger Friday lunches and game nights. We came home so James could prep his breakfasts for the week and I could do some laundry and the vacuuming. 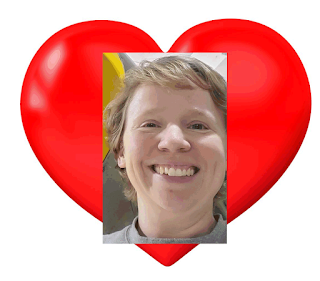 When we got ready for bed I noticed I had a message on my phone, and, holy cow, it was a great one! Our friend Jen, who lives in Oklahoma, was driving south from North Carolina (she had hand-delivered some paintings and then visited relatives) and wanted to stop by for lunch on Sunday! To say that we were thrilled was not the half of it. Valentine's Day or not, James was still working, but I was making chicken cacciatore as a special dinner for his lunch hour. So on Valentine's Day we had four hours of wonderful talk with Jen along with chicken cacciatore, elbow macaroni, a cucumber salad, and dark chocolate Oreos for dessert. It was so nice to see her. She was driving home via a couple of museums and is then going to have to prep to be deployed—she's in the Air Force—to the UAE from April to August. Oh, man, the Middle East in summer! I don't envy her that assignment!

The house was very lonesome when she left.

It was quite a week!

It began with the cold, the first time this year it's really felt like winter. Monday it was 25 degrees with the wind chill and it was almost as cold on Tuesday. I kept warm Monday updating the copyrights on my web pages; usually I do this on New Year's Day after the Rose Parade, but I had other things on my mind. 😞 In the late afternoon I went out to the mailbox and discovered the last document we needed for our taxes, so I sat down and did them. We owe the Feds a small amount, but do have a refund from the state.

It was also a bit annoying because I was feeling rather blah at the beginning of the week and it nagged on for days, even into our weekend. Thursday was the usual trip to the infusion clinic. They told us unless they received orders to the contrary, they'd be removing the PICC line next Thursday, so next Wednesday is James' last infusion! I sure hope there are no contrary orders and they indeed think he is well; it would be such a blessing.

Friday when we went to the podiatrist we got even better news. I was still worried about the leg because he has a few little spots that, even with the medi-honey, are not healing but instead are being irritated by the edges of the non-stick gauze that's covering it, even though the arch of his foot is looking almost perfect, with only some thick hard skin remaining from the blister left on it. The podiatrist peeled most of that off, took a look at those pesky, tiny raw spots, and finally, finally dredged out a calamine unna boot kit and wrapped up his leg in it and told us to let the nurse remove it on Tuesday. 😀 I am crossing fingers this will do the final trick.

Oh, the other thing is that James is out of the walking boot and the thick sock and into a regular sock, so he could wear a complete pair of shoes this weekend! He said he was tired of feeling like the villain in "Ship of Spies" (on Get Smart) who walked with a "clip-clop" noise. Plus today his new slippers arrived; these are the Velcro kind that fit around your feet. So he doesn't need to "clip-clop" any longer, and he was very pleased with this development because he was planning to go to the IPMS meeting on Saturday. It is now being held in a larger venue than previously and he would wear his mask during the meeting, so it seemed safe for him to attend. Came Saturday morning and all the forecasts said it would be pouring that afternoon, so he did the Zoom meeting instead.

So, of course, it never rained. Typical.