It was a quiet weekend. The only down spot was going to the podiatrist on Friday and being told that James needs to go back to the wound clinic. He said we should have called them when the larger blister first appeared last Sunday. (He also took the bandage off the smaller blister without precautions and made another raw spot on his skin. I wish doctors would stay away from James' skin! They don't know how to handle it.)
Thursday did the shopping, and watched the film Sunrise at Campobello for the first time. As many things that I've read and watched about Eleanor and Franklin Roosevelt, I'd never seen this classic film. It starts when FDR gets his "chill" after his day on the sea at Campobello Island in 1921 and ends when he stands to nominate Al Smith for president at the Democratic National Convention in 1924. Hume Cronyn did a great job as Louis Howe.
Got a lot of little chores done this week, for which I was happy, and also having Tin Drum for lunch out this week.

I am thankful...
...these days for many things. My husband's left leg was a mess for months due to being treated in the hospital just before New Year's for a bone infection where he could not wear compression stockings and the doctors just took him off his water pills, so he developed big ugly blisters on the leg. He had antibiotics via a PICC line for forty days, and we had a visiting nurse twice a week until we finally got rid of the last blister last month.
In the kitchen...
...James actually cooked today. We had some Jennie-O turkey burgers available and he just made them up. I don't really like burgers, but these with some Meadowcroft Farms sweet onion relish on them are fabulously delicious.
I am wearing...
...a blue flowered white tank top, black shorts, and white socks with scuffs on. Usual summer attire (the other set is pink-flowered with grey).
I am creating...
...I wrote a note to a friend of mine and was going to pop it into the mailbox, and, lo, the postal carrier came before one p.m. I nearly fainted.
I am going...
...still lot a much of anywhere. Husband was saying how dull and depressed he was feeling because all we ever do is go to the supermarket or Walmart, with Barnes & Noble as a "treat." We need to be going other places, even if it's to shop, because it's just very dull and making me sleepy and stupid-feeling, but it's hard, too. We don't like going much of anywhere in the summer due to the heat. All we have to do is be somewhere hot for a few hours—even if it's just somewhere where the air conditioning isn't working well—and we come home with no energy.
I am wondering...
...silly, really, but what happened to the little speaker I used to have in my office at work. I thought I gave it to my husband, but I don't recall taking it out of his work cubicle when we cleaned it out. I wanted to pass it on to someone, and it seems to have done a flit. Been searching all over for it today...oh, wait, there's somewhere I haven't checked...[moves away from desk]...ah, there it is!
I am reading...
...Terry Nation: The Man Who Invented the Daleks, by Alwyn W. Turner, which is nifty because it's nominally a bio of Nation, but is also a history of British radio and television programming during Nation's lifetime. I also have an ARC (advance reader's copy) of Nicholas Meyer's new Sherlock Holmes book.
I am hoping...
...to come out of this lassitude soon. It's hard in the summer. I am not, and have never have been, a summer person. Summer was only fun when you were in school, and then once you passed your sixteenth birthday and had to go to work in the summer, that became bad news, too.
I am looking forward to...
...autumn. Period. (I suppose I should say DragonCon, but it sounds like it's going to be such a mob from not having the con last year that it sounds daunting instead. Maybe Taste of Smyrna. And a Friends of the Library book sale finally.
I am learning...
...just in a holding pattern.
Around the house...
...husband is working from home—this seems to be permanent, and I am glad, because the idea of him driving out to the Glenlake area every day gives me cold terrors—but not on a call right now, Snowy [the budgie] is burbling along to Leo Laporte ("The Tech Guy" podcast). Tucker [the dog] is asleep on one of the chairs under the dining room table. We have a fan on in forlorn hope that it will circulate the air better and keep down the A/C bill.
I am pondering...
...still people. Don't understand people, never will, even if I am one.
A favorite quote for today...
I recently discovered Hal Borland. This is a good one from him:

"We walked by starlight, and we remembered a time when we had no daylight leisure to walk. We spoke of how daylight is worktime, but that the great dreams are dreamed by starlight. There is warmth and life in the day's sunshine, but it is the stars that lure man's mind to the endless immensity of the universe."
One of my favorite things...
...last night I pulled out our DVDs and we have started to watch The Big Bang Theory over from the beginning.
A few plans for the rest of the week:
The usual shopping on Thursday (we need to go to Costco before the coupons expire). Lunch at Otter's Chicken on Friday. This restaurant was voted to have best chicken wings by "Best of Cobb [County]" magazine.
A peek into my day...
The cutest thing to see every morning: Snowy! 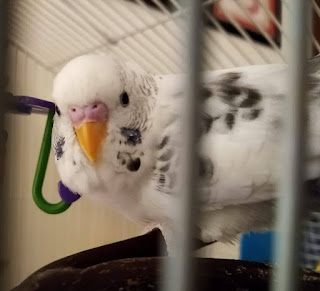 If you'd like to participate, check out The Simple Woman's Daybook.

Aannnnnnd absolutely the last of the Command caddies have gone up.
Ticked off the list: Monday I trimmed the bushes out front so Alex would scoop the debris up when he came to mow. Tuesday the A/C people came to do the annual summer service of the unit. I hate when they bring the salesguy with them. He checked out our water heater, which is, after all, fifteen years old, and was trying to sell us on a deal they had: $30/month and they install it free and do yearly service on it. He says a new unit costs $1,800. That means after sixty months it would be paid for, and then we'd still have to pay $30/month thereafter. Conceivably, then, if the new unit lasted as long as this one has, I'd be paying $5,400 for a water heater? (Of course, should the thing die anytime in that time period, we do get a new one. But mathematically it is paying extra. Deal or not?)
Wednesday I took the spaghetti sauce and the mashed baby vegetables (to add more vitamins to the mix) and the boneless pork ribs and made gravy. It slow-cooked for like ten hours, so it's well done! When it finished we licked it off the spoon like cake batter, it was that good. I was able to use Classico sauce again this time! Years ago that's all I used, their tomato-and-basil no-sugar added sauce for the base of my gravy, and then they started adding sugar. This was so long ago that there was no Facebook, but there were miles of complaints on their web site's feedback page. Just recently we were at Costco and noticed they started selling it with no sugar added again. Took 'em awhile to bow to pressure!
Thursday we did shopping in a great big swath: went to Publix, then I went into Kroger on my own for canned no-salt mushrooms and milk (and a couple of other things). Mushrooms have gone up 20 cents a can! We lunched at Krystal again (because it's cheap), then went to Petco to get Snowy some millet and birdseed. There were three adorable baby budgies in the display cage, all sitting on the floor. Two were mostly white, with blue markings, like Schuyler was, and one was yellow with green markings, like Bandit had been—all harlequin pieds. One white one had his head under his wing, one was falling asleep, and the yellow one was being the guard budgie. So cute with the little stripes still down on their foreheads. But budgies are now $50 each to buy!
We also went to Sprouts for the first time in ages; bought more Litehouse "salad greens" as they call them now (herbs you're supposed to add to your salad, but we put them on the meat when we roast chicken and turkey).
This week's Friday lunch du jour was at the West Cobb Diner with all three Spiveys. Brought home half my portion, as usual, and then we treated ourselves to Barnes & Noble. I finally found the new Ghost and the Haunted Portrait (it's only been out for over a week) and also a book about a road trip taken by Harry and Bess Truman after the 1952 election that looks like fun.
Saturday was Hair Day, which is always fun, then came home to unload and load the dishwasher, that insatiable beast, wash a few clothes, and vacuum the living/dining area of its weekly effluvia of dog hair and bird feathers/seed.